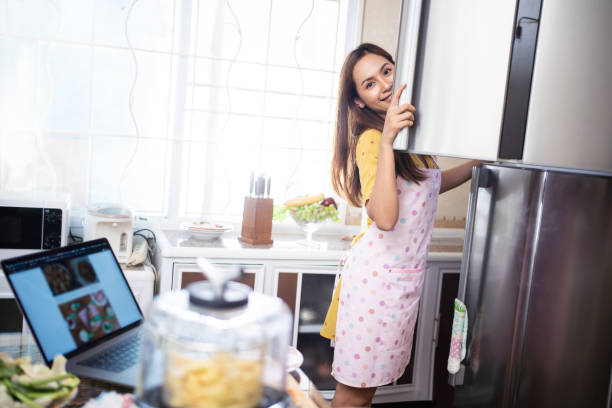 Have you noticed that your refrigerator has become loud? It is important to know that this is not normal. Its noise should not change in normal working order from new to actual. Still, it makes quite a few noises when it’s running, each one characteristic of a different component. And in them, it is worth learning to identify problematic ones, so that corrective measures can be taken in time. For example, a knock or other noise from the refrigerator compressor can suddenly appear. It can knock for the simple reason that the rubber shock-absorbing rings have worn out. It is necessary to replace them. Consider all kinds of situations where this technique can cause abnormal noise.

Violated installation rules
Before claiming the poor quality of a new recently purchased refrigerator, you need to make sure that you yourself did not violate the installation instructions. The fact is that in this technique, the curvature of the surface has an important role. It should be flat, for which the devices are equipped with adjustable legs. Answering the question of why a new refrigerator is noisy, first, it is worth opening the instruction manual for the operation and installation. It clearly spells out the conditions for placing the equipment:

The problem is that many citizens have some inconveniences in terms of space planning in the kitchen. Because of this, there is a need to put appliances in complete contradiction to the instructions. In such a case, the refrigerator begins to work noisily for the following reasons:

1. The compressor hits the walls, furniture, or pipes during operation. This process creates a characteristic rattling sound. Its magnitude and tonality depend on how tightly it is pressed against an object or element of the structure. To solve the problem, it is enough to move it back some proper distance.

2. Runs longer than it should, which often causes the sound of refrigerant circulating. This is often caused by the door not being closed properly or by placing the appliance near heaters. This noise is caused by the rapid evaporation of moisture and heating of the compressor.

Also, the shipping screws can be the cause of the hum of the new refrigerator because of the incorrect installation. They fasten the fan and compressor to the rigid frame of the appliances. If they are not unscrewed, the normal vibration of the motors is transmitted to the body, due to which the whole frame vibrates. Considering that the appliances are made of sheets of steel, the sound is amplified.

In any case, the refrigerator must be installed strictly according to the instructions, otherwise, the unit can make not only loud noises. It will soon fail.

Insufficient air supply
There are also situations when the refrigerator fan is noisy. It is an asynchronous motor equipped with an impeller. Accordingly, it has all the sounds characteristic of such a device, which when working can:

1. Beeping, which indicates that there is an overload on its shaft. This can occur for several reasons, and one of them is insufficient air supply. It is difficult for the impeller to force air through the blocked air inlets. You can eliminate the cause by checking that the refrigerator is properly positioned. The ventilation openings should be clear.

2. The motor has overheated and a short circuit has occurred in the windings, due to which it does not develop power, but consumes more energy. Its hum is accompanied by heating, which can lead to a quick breakdown.

3. The fan runs very often, because the compressor overheats, which is also accompanied by an increase in temperature in the windings. The grease used in the bearings becomes excessively liquid because of the high fan heat, so it does not provide proper slip. Goods are caused by the friction of metal without lubrication.

Throttle capillary tube clogging
Sometimes users encounter a situation where the refrigerator cracks when running. This crackling is nothing but the result of a large pressure drop in the joints and transitions from large to small radii. The refrigerant that circulates in the system makes such loud noises. There is always a characteristic noise, but at some point, it becomes too loud. This condition indicates a blockage in the system.

Theoretically, it should not form, only in the filter. In fact, this element retains only large particles. Everything small successfully drives through itself, so a clog is formed at the place of transition from a larger diameter of pipes to a smaller one. This occurs because of the available cut of the tube, for which the small fractions cling and accumulate.

This defect can be eliminated by performing the following steps:

1. All refrigerant must be drained from the system.
2. Blow out the system with nitrogen, because there is always moisture in the compressed air.
3. Remove the filter drier.
4. Re-blow and install a new filter.
5. Fill the system with freon according to all the rules for this procedure.
6. If the refrigerator is still noisy, open the connections at the transition points to see the problem and re-solder the system parts.

Malfunction of the electrical system
The refrigerator makes a noise when you turn it on, and what to do, you do not know. First, try to determine what exactly and at what point the sound occurs. If it is a humming noise, and when you pay attention to the light bulb there is a voltage sag, it indicates a problem in the power grid.

The compressor, judging by its dimensions, is a very powerful asynchronous motor. Accordingly, it requires a lot of power to start up steadily, which is insufficient at the moment. The motor tries to enter the operating mode, but it fails, because the exit point is high on the characteristic. As a result, the power consumption is going on, but there is no exit to the mode. This process is accompanied by the hum and gradual heating.

It is possible to eliminate such sounds of refrigerator operation only by installing the network stabilizer. As a rule, such problems are not observed in the apartment sector. Sags and surges of power occur in a private or holiday village when the substation can not cope with the load and operates in the mode of severe overload.

Our service center is open 24/7, so you can easily schedule a convenient repair time. The specialist will arrive at the agreed time, carry out a diagnosis, and, if necessary, offer repairs. If you are willing, your appliance will be repaired directly on-site within 1-2 hours. We provide top-notch service at an affordable price!

The microwave stopped turning on

Often malfunctions in which the microwave has stopped turning on are due to the “human factor”. Before opening the case, make sure that there is power. Check the cable connection to the network. Analyze the performance of the outlet. Try to plug another device into it. Or the device itself is diagnosed in another contact...
Read more
20Nov

Why the washing machine shakes and vibrates

In modern life, the washing machine occupies one of the most important places in human life. Remember how you washed 20-30 years ago? Washing usually took almost a whole day. And it’s good if your washing machine had a centrifuge that helped to spin the laundry. Today, washing machines have become much more functional. They...
Read more